As the country, and the demand for beef, exploded during the 1800s, many ranchers started to move cattle the only way they could: via long cattle drives across the country. These drives originated in Texas, where ranchers would move hundreds of heads of cattle to railheads for shipping and sales. It was a vibrant industry that became even more profitable as demand went up.

However, ranchers soon faced opposition from local farmers throughout various states through which the ranchers had to move their cattle to reach the railroads. Farmers were afraid that the herds of cattle would trample their crops and spread disease to local cattle. Eventually, local farmers helped to pass laws prohibiting the movement of cattle through their lands. Also, as time went on, the country changed, the Civil War happened, and more and more people were moving west. With the addition of the Transcontinental Railroad stretching from one side of the country to the other, ranchers were able to move westward where there were larger tracks of land for their cattle.

After moving to the Rocky Mountain area of the western United States, ranchers let their cattle graze in massive pastures, moving them around during the summer, then moving them to sell in the fall. Eventually, after harsh winters and disease, ranchers started to put up barbed wire around their ranches to keep their cattle separate from others, eliminating the tradition of open ranching.

Today, cattle drives usually consist of moving herds from their winter ranch homes to the summer grazing pastures. Many ranches still use traditional methods, horses, to wrangle their cattle. Working ranches, dude ranches, and guest ranches offer guest cattle drive experiences. Though they are not the long romantic cattle drives of the old days, they are still a taste of the past in today’s modern age.

Ranches, such as Bull Hill near Kettle Falls, WA, will give guests the chance to join the ranchers for the seasonal drive. In the late spring, after the foals and calves are born and ready to be moved, the cattle are taken out to their summer pastures. They roam the land throughout the summer. Then, in late fall, before winter starts to set in, ranchers and guests take up their horses, search the pastures for the cattle, and drive them home for the winter.

Cattle drives are an important part of how the West was shaped. Though the days of long cattle runs are over thanks to modern transportation, the tradition of moving cattle still exists today. To experience this tradition firsthand, visit one of the many working ranches across the West.
Bull Hill Guest Ranch
1-877-285-5445 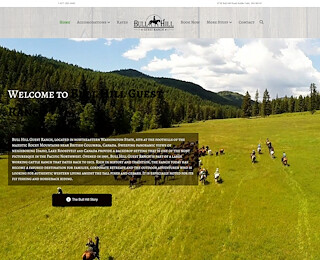